Travelling with wheels – to be back on board Endellion

Posted on September 3, 2010 by Lesley and Stewart

Finally, after an even worse than usual journey, we are back on board Endellion – and with absolutely no regrets as even the torturous journey can’t dampen our delight at being here. It’s  the usual challenge with long (in fact any) flights: accessibility .. or total lack of it and training for the people who are ‘helpers’, ie, staff.

Stewart is brilliant .. just ‘grins and bares it’ which is what one of his ‘handlers’ actually told him to do! A couple of examples of Stewart’s determination and spirit.. not that we want to put off fellow wheelchair travellers. First we had a disgraceful episode boarding in Sydney: Flight crew found the Qantas isle chair (always a bit of joke as they are so tiny and inadequate) wouldn’t fit through the isle so they manhandled Stewart into another chair (even smaller) by having untrained but beefy flight crew lifting him up under the arms, holding him suspended and pulling one chair out and swapping it! It took more than 20 minutes to get from the entrance of the plane to our seats .. which were right at the back of the plane. The crew later told us they were planning on using the rear door right by our seats but didn’t for some reason.

Singapore… well, everyone knows you have to get off in Singapore. But we had asked the Qantas crew to get dispensation (successful for us two years ago on the same flight). There was no way they would have been able to get Stewart back into a shocking isle chair and drag him all the way through the plane, around the airport in yet another chair and back on board. Apparently the flight Captain tried to get dispensation but no, the Singapore authorities stood over us demanding he disembarks.  Stewart refused. The airport policeman then stood over me and told me to tell my husband he MUST get off here. I told him to talk to my husband not me.  Stewart said “I’m not getting off”.

The Qantas crew and I thought we’re about to be arrested .. but finally (after an hour or more) the aggressive policeman backed off, telling a Qantas flight attendant “he can stay” but will need to be frisked. The frisker arrived and padded Stewart down .. and completely ignored me. Why did they think Stewart was such a risk but not me?

After that … we had a good flight into Frankfurt and the contrast of efficiency and compassion shown at this airport was a very pleasant surprise.

Frankfurt airport isle chair – this should be standard to all airports.

We were greeted by a professional  isle chair along with paramedics to help Stewart with transfers which was a relative breeze, even at the end of this very long journey, down the entire length of the plane. A big disappointment was that his own chair was not at the aeroplane door despite airport regulations that it must be. His chair had been sent to baggage collection. Which meant another several unfair transfers were needed, into the airport chair (nothing like as bad as the Qantas ones which have Stewart’s knees up around his shoulders) and again back into his power chair finally located in the baggage area.

Next, Frankfurt Sky Train (no ramp required, straight on like everyone else) at Terminal 1 to Terminal 2 for the international long distance train station.  Then ramps are required all the way: Frankfurt to Cologne, Cologne to Brussels, Brussels to Oostende .. and then taxi (or as they call wheelchair accessible varieties here ‘ambulance’, and where Stewart is referred to as a patient not a customer) to our marina.

Stewart .. parked in the on-off space as the wheelchair won’t fit into the carriage!

Stewart on one of the huge ramps needed to get on and off the trains.

Final stage of journey is into the ‘ambulance’ at Oostende.

We arrived at VVW Westhoek quite exhausted, taxi dropped us off with all seven bags (a miracle we still had them all) and disappeared. But where is our boat?

Six of our seven bags – I counted these maybe 50 times during our journey!

At 3.15pm we were not planning on sleeping but to get the boat ready for that, after a year packed away in storage, we had a lot to do. Without the boat we could do nothing but wait .. in the cafe nearby. That meant moving all seven bags again into storage and tracking down our boat. 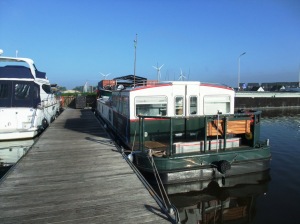 Well, it arrived at 8.00pm and now we are happily tapping away at our keyboards soaking up the wonderful feeling of being with our Endellion on the water in Belgium.

Loving great waterways of the world.
View all posts by Lesley and Stewart →
This entry was posted in Accessibility and tagged Endellion barge, Travel, Wheelchair access. Bookmark the permalink.