The Journey: Maastricht to Amsterdam – part 1

The journey from Maastricht to Amsterdam took us on the following waterways:

And coming up soon we will continue with:

Trying to catch up with our blogging has been difficult mostly because there is so much going on around us and we have little to no internet connection. This lack of connection is very frustrating as it’s so difficult to be in contact with our friends and family – and we have no Google! Without the Google tool our knowledge source has been drastically reduced, we’re mostly relying on guide books supplied by the towns we visit which can be
biased and limited in facts. Memories from our education in history and geography is somewhat faded, well, we’re talking about almost 50 years ago when we were swatting up on these subjects!

We found it hard to believe we could like another country as much, maybe more, than France, and Belgium was so delightful too.. how could we feel even more comfortable with our surroundings and the people we meet?

Even though in the Flanders part of Belgium they speak Dutch (well, Flemish but very close to Dutch as opposed to the French-speaking part of Belgium in Wallonia) culturally it is definitely totally different to the Netherlands. A step or two across an invisible national border and it is very clearly another culture, somewhat intangible but clearly another country with different architecture, city layouts, social policies, consideration for one
another and seamlessness of access for wheelchairs.

So .. well into the Netherlands by now we will try to cover some of the highlights since our Maastricht blog focusing on the towns and events of the past few weeks.

Weert .. a small Dutch town just across the border from Belgium

When we finally left Maastricht (after a full-on 6 days) we chose to use the dog-leg canal, Zuidwillemsvaart, which took us briefly back into Belgium and the tiny town of Bree with an excellent  mooring, perfectly accessible.

Cyclists watch us pass under the cycleway on the ZuidWillemsVaart, Belgium

This stretch of canal is quiet and green with the typical Belgium scene  of cyclists of all styles (lycra, business dress, skirts, jeans – old/young and tiny/big) using the tow path by the hoard. But we didn’t stay more than one short night – the next day we pushed on back into the Netherlands. 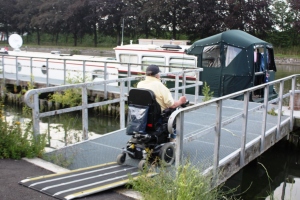 We had been advised to moor at a large commercial port, now almost deserted, at Weert by Harrie who Stewart ‘found’ via the internet and after many exchanges of emails he was
going to visit us to sort out our problematic Kathrein satellite dish. He arrived a little early.. accompanied by Melun his grandson, a budding airline pilot. School holidays were on so he’d brought his grandson to assist in translation although it was probably just a good excuse to have him along. He told us how Melun often sits up to watch via his telescope the Qantas flight Q2/1 go overhead at 6.00am. What a great young man he is .. dad is a pilot of 747s but this chap wants to fly 380s of course, and we’re sure he will and
certainly we strongly hope he does. Maybe even for Qantas he hopes. Harrie wouldn’t charge us for all his advice, assistance and for driving to us and spending an hour or more of his and Melun’s time trying to solve our small problems. Turned out the builders/installers in Yorkshire when the dish was installed in 2008, had cut off one of the three wires (what they call the green wire). He tweaked all sorts and installed the latest version software so it’s working perfectly..almost. 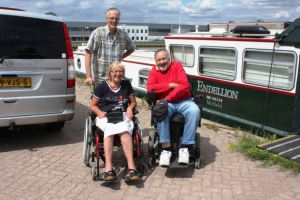 Marian, Gareet and Stewart at Weert.

We waved goodbye and minutes later another vehicle pulled up right outside (consider, there are no boats anywhere near us, we’re in a vast open space all to ourselves) and
this is Gareet and Marian as expected – handing me a beautiful big bunch of flowers, not expected. Coffee and long chats about MS and the Netherlands and all sorts. Marian is another person with MS and has been extremely kind and helpful exchanging emails with Stewart on what to expect in the Netherlands when travelling with a wheelchair.

Full on fire drill at Weert in the old port.

It was such a strange place we found here (on the recommendation of Harrie), an old commercial port now almost deserted except for us and two vacant commercial barges .. and to our joy that evening two big fire engines arrived with their brightly coloured Firemen practising with their hoses!

This town, more commonly known as Den Bosch, was well worth a few days stay, it’s big with many things to see and do.. although the mooring was a bit tricky with a steep
concrete ramp up from  our mooring to street level. But.. it was doable with our own
Mighty ramp to assist.

Coming into town was our first experience with multiple ‘mobile’ bridges, (lift and swing
bridges) two in particular either side of a big round lock. Down we went, lock gates and lift bridge opened and everyone started to scuttle out, hurriedly as this was a big city (relatively speaking) and lots of traffic was being held up. First the cruiser followed by the big private commercial-sized barge, then the tjalk although just as it was getting to the bridge it started to close, the red light came on and the bridge dropped very quickly. We still had to go under it too.. then we remembered it was 3.5 meters and this was fine for us
although it didn’t look it. The tjalk proceeded under the closed bridge and we did the same and yes, we fitted with it closed! This time anyway.

We loved the Hieronymus Bosch Art Centre, in a huge old Roman Catholic church (built 1907) .. that was fascinating in itself, ie, taking the church and converting it into an art centre. The mandatory tower of the church included a glass sided lift all the way to the top where perhaps there used to be a bell.. and certainly today there is a great view across the region. Very rare for Stewart to get to these as we’ve never seen another lift like this in a church tower. The mind of this artist of the mid-15th to 16thcentury was very original and creative to say the least.

What colours, imagination and propoganda in Bosch's paintings.

This is the city where he was born, raised and lived and so  rightfully they dedicated this centre to him.

A model of Heusden as it was centuries ago, still much the same today.

A short distance from Den Bosch, leaving the relative calm of the Zuidwillemsvaart and bobbing down the vast Maas River for a few kilometres, was quite a different experience.

Stewart on the fortifications protecting Heusden, along with the canons.

We arrived at a very beautiful small town, picture postcard perfect but in fact a town with great heart and character, mostly because of the people we met there in town and at the marina..

The River Maas is wide, more like being at sea with 'beaches' regularly dotted along the way.

Harrie and Rina, the Harbourmaster and Assistant Harbourmasters, one young woman also working part-time at the local cafe. No matter where we went we were often greeted with “Oh, you’re the people with the big barge”.. word seemed to spread and we felt we’d been there for years, almost locals! In fact we stayed a whole week because we loved it so much.

1 Response to The Journey: Maastricht to Amsterdam – part 1