On board again after a fortnight in Cornwall and at Saint Endellion for the big wedding of Ben and Nicola, to take “Endellion” (the barge) south from Wambrechies (near Lille) to Paris, with a side-trip to Arras for Armistice Day.

Factories in ruin at the beginning of the Scarpe superior.

First stage of the Scarpe superior from Douai.

Endellion moored at Courcelles les Lens, definitely autumn, on our way to Arras.

We, like many, well knew of the World War I battles in Ypres and on the Somme, where Grandfather Austin Shepherd had served as a gunner and then in the vet corps, looking after the horses on the battlefields.

We’d also visited and glimpsed the appalling human slaughter around Verdun and in Flanders. However we did not really understand what had gone on near the city of Arras in France.  So we decided to do a quick side-trip off the Deule to be there for Armistice Day; the 11th of the 11th, 2011.

Endellion moored above the lock at Biache Saint Vaast on the Scarpe superior.

It’s only 20-odd kilometres from Douai up to Arras, but weed in the water and slow, slow automatic locks, which seemed to take forever to fill and empty, made for a long but enjoyable couple of days on the Scarpe Superior.

Image from Base Nautique St Laurent Blangy: kayakers on the flume.

Endellion moored on the far bank opposite the St Laurent pontoons and flume.

Finger pontoons in the heart of Arras, closed at present.

Unfortunately it’s presently not possible to cruise right into Arras.  Work on refurbishing the final lock continues and proper moorings in the harbour will be needed.  So we moored up on the grassy bank at Saint Laurent-Blangy, a town with a passion and renown as canoeing and kayaking capital of France.

The paddlers of tomorrow, small children of 6 or 7 were out on the canal as we approached and just across from us we discovered was a very modern Flume;  an artificial set of rapids used to train competitors for next year’s London Olympics.

Armistice Day Friday the 11th of the 11th, 2011 dawned cold and overcast; about 5 degrees centigrade overnight and a forecast maximum of 11.  It felt colder to us as our heating system is on the blink with new parts ordered from the UK set to arrive next week back in Douai.

Stewart with the 'giants' waiting at the Town Hall, Arras. 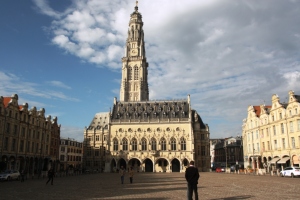 Town Hall at the Petite Place in Arras.

We headed into Arras about two kilometres away on foot and power wheelchair. The streets were largely empty as it’s a holiday in France, arriving early as we so often seem to.

Few were at the cenotaph save a platoon of young soldiers in flimsy uniforms standing guard while a couple of their senior officers, their medals jangling, fussed with the microphones.  It’s a statue by famous French sculptor Felix-Alexandre Desruelles.

Soon a large crowd had gathered which included a group of Canadian school students which sang a song in French before they, local school children and the dignitaries and laid wreaths.

All very poignant, but we felt it was very removed from the horrors of war we’d been learning about on our travels here over the last couple of years.  Where in Arras might we be able to learn in a more first-hand way of its WWI times?

The Tourist Office (a very helpful one, once we had found the way in for wheelchairs), had suggested we visit la Carrière Wellington which they said was totally wheelchair accessible and open all day.

One of the multimedia images within the tunnels of the Carriere Wellington.

So we headed off and despite a general lack of signs eventually found it, went inside and were taken down 20 metres below Arras in a lift to learn it’s remarkable and still not well-known story.

Signs pointing to Exit 10, up the steps to natural daylight and battle.

Steps at Exit 10 leading to battle.

In medieval times as Arras became wealthy on its textile industries, vast caves were dug to mine the chalk building blocks to build the houses which surround its impressive squares.

These great chambers under the city were left empty and forgotten until late in World War I, when a plan was devised to launch an attack on the German lines around Arras as a distraction for another attack further south near Reims.

Plaque thanking the New Zealand miners for the amazing work in 1917 at the chalk mines.

Catching the enemy unaware was to be a key in the attack, so 500 New Zealand tunnellers – mainly Maoris, together with many apparently short-statured Yorkshire coal miners – dug a vast network of 20 kilometres of tunnels to link these chambers.  Twenty-four thousand (yes 24,000) Allied soldiers spent nine days crowded together down there in the dark.  Then at 05:30 on April the 9th, 1917, they burst up into the daylight, for the largest and most surprising battle of the of the war, the Battle of Arras.

Various parts of the whole network were named after different cities in New Zealand and the UK.  In the 1990s, the Wellington Quarry was opened up by archaeologists who discovered little had changed down there in nearly 90 years.  Signs painted on the walls looked as if they were only painted yesterday; kitchens, a hospital, showers, encryptions – some in Maori – little drawings, names, electric lighting fittings, bottles, food cans and the like.

The saddest and most memorable place we visited though was the steps carved into the chalk up  which the troops had surged, many to their deaths on that fateful, terrible day. 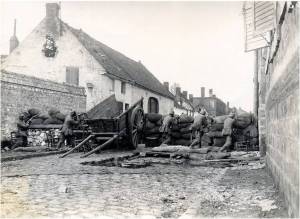 Photo from Blake Goodman's photostream: Germans fighting in the streets of St Laurent.

You can read more of The Battle of Arras here.

Meanwhile .. after a heavy, but special Armistice Day in Arras .. we are presently moored on the banks of a small village (Vitry en Artois) on our return trip down the Scarpe Superior to have our heating repaired (we hope). Can’t wait .. we have several nights at freezing point coming up!

We hope our friends and family are staying warm/cool and comfortable whichever the hemisphere.