Australia: a 90th birthday and the house on the River

Just in case you wondered (and may have missed out on meeting or talking with us since our last blog) .. we survived the flight and arrived in Sydney somewhat frazzled but in good spirits. From the airport we took a taxi to collect a wheelchair accessible van to drive to Canberra, around 300 kilometres heading south-west to be with Stewart’s mum, Jean, to celebrate her 90thbirthday. 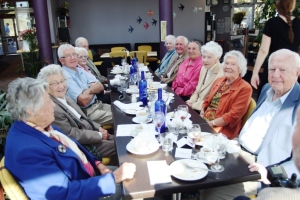 The first big event was held at Mount Stromlo (where in 2003 the Canberra fires hit Mount Stromlo and destroyed most of the buildings and telescopes, now rebuilt. 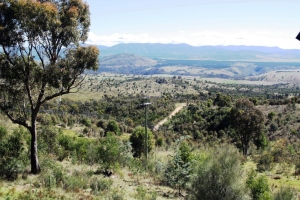 The old farmland, recovering from bush fire damage of 2003.

The cafe/restaurant, Scope, overlooked the old property that Jean farmed where Stewart and his brother Ian grew up – a perfect venue to share time with Jean’s contemporaries (ie, mostly 90 year-olds): a totally engaging group of lively individuals.

Whilst in Canberra we visited Tom (son of Lesley and John, see our blog here) who, when he was in Paris over the past winter, created a gourmet dinner and the best ever beef burgers for us on board Endellion. His beef burger recipe, he explained, came from a friend who had a little red caravan, located in Bowen Park, cooking these burgers where Tom worked part-time when not creating his own gourmet recipes. It turned out, when he arrived back in Canberra, (after his Paris visit) his friend had been asked to ‘move on’ from the park and the government had offered the lease on premises next to the Glasshouse Museum . This background story is because it is likely to be one of the great success stories of entrepreneurship. They have been swamped with customers ever since the opening of Brodburger and to see Tom in his element, working huge hours but achieving great success, was a delight.

The SE5A biplane at the War Memorial in Canberra

In complete contrast we visited the War Memorial Museum with Uncle Bob and Aunty Roma – a wonderful day in glorious sunshine. The focus of our visit to the museum was to see the SE (Scout Experimental) 5a biplane in which Stewart’s Great Uncle Dudley (and Bob’s Uncle) flew and was killed (England, 1918). We also watched the riveting multimedia show which Peter Jackson produced (the producer of Lord of the Rings and other great movies): The story of military flight  and aerial combat during the First World War. When we asked the reception staff if perhaps Peter Jackson did his amazing production work for a reduced fee  the answer was “Yes”. He is a major WWI buff and has four or so historic planes himself but doesn’t have an Albatross. At this museum they have the best of only two in the world, the other is in the USA. Apparenly the deal was that Jackson produced this wonderful multimedia show and in return he was given access to use the Albatross to create a 3D model. We think this can only be very positive for all involved. 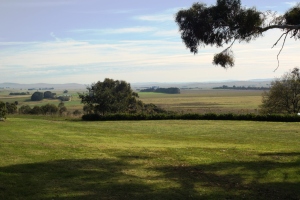 Looking out across Connen Hill, Ian and Pammie’s property near Goulburn.

After many lovely days in Canberra we drove around 100 kilometres east, heading back towards Sydney, to visit Stewart’s brother Ian and wife Pammie and to celebrate, again, their mum’s 90thbirthday – this time with immediate family. Ian and Pammie have a 5,000 acre property, Connen Hill, just outside Goulburn on the Lake Bathurst road. 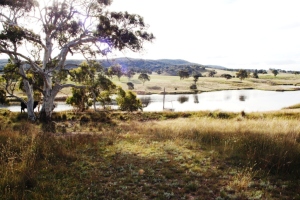 Looking across the dam at Connen Hill .. now full again after 10 years of drought. It’s big enough to water ski on and Austin has had a few hours off work to enjoy it on occasion.

With all our travels, we’d almost forgotten the main reason we love Australia so much .. in addition to friends and family of course, it’s the country.

Ian runs the property these days with the support of his younger son Austin. It’s so hard to imagine how tough it’s been for them for the past ten years since they have been in a drought.

Ian and youngest son Austin who run the 5,000 acres on their own with occasional help from other family members of course .. and their dogs.

This summer (southern hemisphere) they have finally had serious rain.

Driving around the 5,000 acres makes you really appreciate what huge work these two men do and how well-managed it all is.

The McLennans/MacLennans (spelling is a long story) and the Shepherds celebrating, again, Jean’s 90th birthday at Connen Hill.

What a totally wonderful country this is .. only photos can show what we mean, we hope.

Stewart and Jack have a yarn on the veranda at Connen Hill.

Finally, after the first week back in Australia, we arrived at our home at Milsons Passage on the Hawkesbury River.

Water access only, our house is the tall one to left of photo with dormer windows.

Our house is accessible only by boat as it’s on the edge of the Muogamarra National Park with no roads anywhere near it.

The door cut in the side of our boat, easy access for the wheelchair with our ramps.

We take our five meter Webster twin hull from Fenwick’s Marina and in 15 minutes we are at our jetty. To get into the boat we open the door cut into the side (newly created by Steve and the team from Callaghan Marine) and Stewart drives his power chair via the pontoon straight on and off.

Stewart at the wheel of Dolphin II our 5 meter ‘runabout’ .. a bit different from Endellion.

From the pontoon he drives to the foot of our very steep ramp up the hill to our house and we hitch the chair to a winch, press the button and it pulls chair and Stewart up the very steep incline. Brilliant!

Stewart on the end of a piece of string with the winch pulling him up the steep slope (or dropping him down). Then straight onto or off our boat and away.

Although definitely scary as the ‘rope’ on which he is dangling is tiny but we are assured it is very strong parachute rope able to take 800 kilograms.

Since arriving ‘home’ we have been frantically busy .. meeting our friends either in the city (driving the car to Sydney takes around one hour from our boat mooring at Fenwick’s), at our house or at our new favourite cafe at Berowra Waters.

We’ve been non-stop working on repairs to our house, somewhat beaten up after 18 months of paying ‘weekend guests’ – a popular house it seems but it shows in wear and tear. And we’ve had the joy of living on the river in our warm and wonderful house.

Rocks along the shore of our Milsons Passage haven.

Joining the annual gathering for ANZAC day at the Bowling Club in Sydney. This year Stewart launched the book ‘Without Glamour’ by Wendy Willcocks, which tells of the Second 18th Battalion, which his and Ian’s father served in. 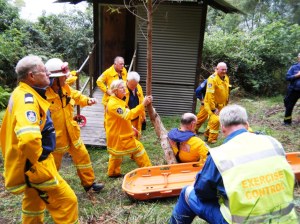 Milsons Passage Volunteer Fire Brigade Captain John (foreground) and some of our crew attending the ‘hot debrief’ on the exercise.

Participating in the regional Volunteer Fire Brigade exercise ‘Deerubbin’ (named after our local boat slip area known these days as ‘The Ruins’). Six ‘River Rats’ (fire brigades with barges, ie, water-side locations) spent the morning simulating real-life emergencies and this time we were faced with a ‘lab’ camouflaged in one of the many caves in our vast parks around the river.

Setting off for the fire brigade exercise.

This one was a bomb-making lab complete with everything one would actually use to make bombs.. we won’t go into detail but needless to say the request was ‘Please don’t speak to the media’ prior to our exercise. 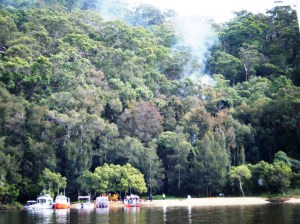 Fires are our usual threat and all we generally think about .. so up there in our back yard (so to speak) the thought that someone could be making bombs is a daunting but remote possibility. 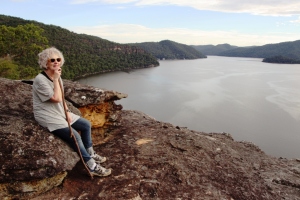 Janie on the ridge above our house at Milsons Passage.

Walking the ridge above our house (and on a very positive note compared to bomb-making) with Janie, and then kayaking around Milson Island with her… and all three of us laughing watching (again) Oh Brother Where Art Thou in our movie room below the main house.

Sitting beside the water in our gorgeous boat house while inside the wood burner roared away to the tune (almost) of our old LPs like Pink Floyd, Sonny & Brownie, The Dingoes, Rye Cooder.. very different to our friends down river (Lindsay and Sue). We had a brilliant night on their jetty at full moon (super bright) and big tide and found they also have the old record player and LPs in their boat house.

Attending the monthly Milsons Passage Volunteer Fire Brigade meeting and being issued with the latest Carrick invention, a gutter cleaner, and told to get to work with it.

The Carrick gutter cleaner in action.

See John’s other inventions here .. the gutter cleaner is not yet patented so I can’t give too much detail about it! I can confirm it works brilliantly on the gutters of the fire brigade’s meeting hall.

Memorable.. and a highlight for the agony: being eaten alive by so many dreadful midges (also known as sand flies) and mosquitoes resulting in well over a hundred red, swollen welts particularly on the legs. Meanwhile.. the genuine Aussie (unfortunately not Lesley), who seems to be resistant and/or not to the liking of the insects, remains completely bite-free.

We’ve had mixed feelings of excitement to be back home in Australia and our beautiful river-side house (we know we are incredibly lucky to be here) and yet missing our boat Endellion and life in Europe. Then again, it won’t be long and we will back on board not far from Paris and ready for another year of adventure on the canals of Europe.

Loving great waterways of the world.
View all posts by Lesley and Stewart →
This entry was posted in Accessibility, Australia and tagged 2nd 18th Battalion, family and friends, Wheelchair access. Bookmark the permalink.

1 Response to Australia: a 90th birthday and the house on the River