Winter travels from our Paris base

We’ve crammed in quite a bit of travel since our last blog: by car and train.

We finally made it to the UK by late-January for our postponed Christmas in Cornwall. Christophe (owner of adapted hire vehicle company www.ptitcar.com) came good with our van which he delivered to the Port de l’Arsenal, right beside our boat, on the evening before departure. We bundled all the Christmas presents, suitcase, ramp, bed bar, etc. inside the small van and set off in good time the following morning with our GPS leading us safely out of busy Paris.

The day before leaving for Cornwall we had calls from family and friends telling us the snow was extremely bad and many roads were closed and were we seriously going to risk coming. Yes, we were certainly not going to postpone again, and there was no snow in the inner city of Paris, it can’t be that bad we thought. But, as soon as we reached the outer suburbs of Paris everything turned a beautiful white, although thankfully the motorway to Calais was clear of snow.

Normally we average six kilometres per hour (in Endellion) and here we were closer to 90 kph! Familiar names flashed by: Compiegne, St Quentin, Arras, Lens, Lille .. all places we had visited by boat but taking us weeks.

Arriving safely at the entrance to the Oxford hotel, hire van small but perfect.

Emerging from the car train (Eurotunnel) at Folkestone, now in the UK, there was no snow but the sky was very heavy with what looked like plenty ahead. It soon became white and pretty and worrying. In fact we had no problems reaching our hotel in Oxford although, sadly, brother Dean and family couldn’t get out of their homes to meet up (per our rescheduled plan).

The towpath at the foot of the Hotel gardens, Oxford centre a short distance away.

It was a very different Oxford to the one we experience when on Endellion, moored along the bank just by the hotel, in 2009.  First of all it was white, second we were on land. We had booked a wheelchair accessible room at the hotel (Four Pillars) but of all things we found Stewart could not get into the bathroom as it was too small and poorly designed (the door opening inwards and taking up most of the available floor space). Instead we had to go to the ground-floor, through many corridors into an extension of the main building where there was a gymnasium with a regulation-compliant accessible public bathroom. What a disgrace .. but they say they will fix this for our next visit and it will be a free one. Although that’s hardly the point.

We travelled on to Cornwall the next day making a stopover for lunch at Exeter, in Devon, to visit niece Jac Hawkey, a university student there. Exeter University has just been named the Sunday Times University of the Year 2013. Jac is a member of the Trampoline Club (amongst other things) at the university and in a few weeks time she undertakes a 100 mile walk for the club and charity! Best of luck Jac, hope the trampolining gets you fit for it.

The white countryside continued all the way until shortly before the outskirts of this great city (Exeter) and that was the end of the English snow. Cornwall is mild, being the most southerly point in Britain and in the west of the county the shores are almost washed by the Gulf Stream. So the chances of snow are very remote.

Once again we lodged with brother Jonney and Felicity at their cottage across the road from their Pub (the Cornish Arms at Pendoggett) which has a properly accessible bathroom and shower.

During our stay we toured with mum (Joan) visiting Truro for the cathedral, a very ‘modern’ one (built 1880-1910) the first cathedral to be built on a new site in England since Salisbury Cathedral in 1220. We braced ourselves on the Atlantic cliff tops at Tintagel looking across to the ruins of King Arthur’s Castle, and took afternoon tea at the adjacent Camelot Hotel. There’s a very interesting story to this ‘hotel’, the home of three active Scientologists of some controversy. 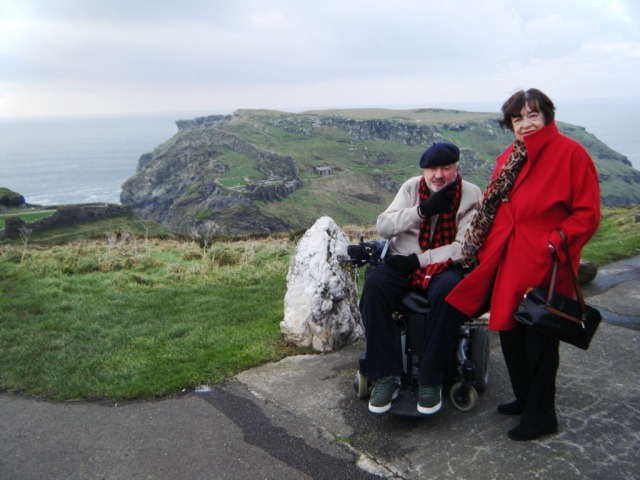 Stewart and mum (Joan), bracing themselves, at Tintagel, behind them the ruins of King Arthur’s Castle.

We also visited the Duchy Nursery at Lostwithiel, chiefly to admire the building itself which was constructed only a few years ago mostly of locally sourced wood and built by local craftsmen, and to enjoy lunch in their very popular cafe, sitting around a lovely roaring open fire. 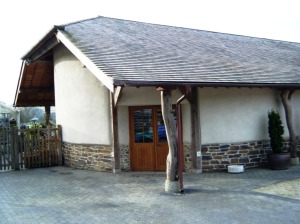 And we squeezed in a brief visit to the Sir John Betjeman Centre in our Cornish home town of Wadebridge. In 1969, he was knighted and in 1972 was made Poet Laureate. 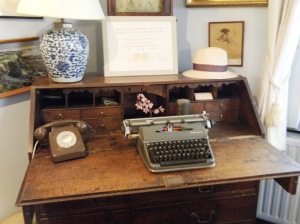 Sir John Betjeman’s desk and typewriter at the museum in Wadebridge.

He loved Cornwall and is buried at St Enodoc church set in the sand dunes near his home at Trebetherick, a few miles from Wadebridge. One of our favourite Sir John’s poems is about St Endellion, the church in which we were married. It starts: “St. Endellion! St. Endellion! The name is like a ring of bells.”

The museum is in the old Wadebridge Railway Station where I used to sit with my brothers waiting for the train to arrive for Grogley Halt to visit my grandmother, on the old steam trains!

Finally, time to leave Cornwall and with a good channel crossing on the car train we were back in France heading for Amiens. We were rather surprised to find ourselves back in white country; it had melted in the south of England.  The main roads were clear of problems but once off into the country around Amiens things changed.

Amiens, on the River Somme, is around 100 kilometres north of Paris and we can (and will one day) visit it by boat. It is yet another town in this region which has been at the centre of some of the most atrocious wars, with the Spanish, Prussians and then of course the Germans during WWI and WWII.

On 7 November 1920 in Notre Dame d’Amiens Cathedral the Bishop of Amiens paid tribute to the soldiers of Australia for defending this city in its hour of peril, between March and August 1918.

Amiens cathedral, the lightshow photo from Wikimedia shows the original colours of the western entrance.

It was in this area that Stewart’s Grandpa Austin Shepherd served in WWI. Austin was a driver then gunner with The 5th Field Artillery. Later, due to the expertise he’d gained at Hawkesbury Agricultural College, he was transferred to the Army Vet Corps to look after injured horses.

One of the reasons for our stop-over in this area was to explore boat moorings along the River Somme where we’d like to visit in the future on board Endellion.

So it was quite amusing to see the lock and pleasure boat port at nearby Corbie completely frozen over with empty beer bottles scattered over the surface. With a bit of imagination we could see it could be very pleasant, and accessible for the wheelchair.

Pleasure boat moorings at Corbie on the Somme, but this boat won’t be going anywhere soon -the whole canal is frozen over.

We left Corbie to head for Rouen, using our GPS to get to the quickest and most snow free route. However, we became more and more uncomfortable as the roads narrowed, the snow became far denser and we seemed to be mostly on our own, no other cars around. This route took us right up to the Australian Third Division memorial at Sailly–le–Sec, more information here at the Australian Western Front website.

We also drove close to the village of Villers-Bretonneux where the French-Australian museum is located, almost every road is named after a place in Australia.

Deep snow and more coming, we chose to retrace our route to Amiens.

It’s the home of the Australian National Memorial bearing names of the more than 11,000 Australian soldiers who fell in France in WWI, and whose resting places are unknown.

With the snow so deep, and more coming, we chose to retrace our steps back to Amiens and took the longer but safer route to our next stop of Rouen, 100 or so kilometres south-west in Normandy, not far from Le Havre. This is another city we have in mind for a waterway visit this year. Stewart’s Great Uncle Dudley Shepherd, in WWI, was based in Rouen. Dudley first served as a driver with the Transport Corp, but died in an accident in the UK while learning to fly for the Australian Flying Corps, four months to the day before the end of the War.

The snow reduced the closer we came to the coast and in fact this was the last of it .. for the time being. Apparently Rouen, on the river Seine, is the world’s leading port for grain exports, and the leading port in the European Union (EU) for the export of agricultural produce, so no wonder it is not considered a pleasure boat paradise. The river is extremely busy with commercial traffic but the city is a total delight, although extremely busy with tourists!

Thousands died in the Great Plague of 1348 in Rouen and a new cemetery had to be opened: here at the Aître Saint-Maclou.

Exploring the city of Rouen – a delight.

From the reign of William the Conqueror onwards, Rouen was the capital of the Dukes of Normandy and had its own ‘harbour’ near London at Dunegate (known as Dungeness these days) where wines of Burgundy and the Champagne region were delivered. Dungeness is not far from Hastings! During the Hundred Years War the English occupied Rouen (1418 – 1419) up until 1449.

Inside Rouen Joan of Arc church, modern but with the stained glass windows which were saved from WWII bombing.

It was during this time that Joan of Arc was burnt at the stake (1431) and it wasn’t until very recently, in 1979 (after the original church was bombed in WWII), a modern church was built and named in her memory.

We’re hoping to return here (Rouen) with Endellion in late June and tour Normandy and Brittany by van – not far away (for example) is the city of Bayeux  where we want to explore first-hand the story of the Battle of Hastings as told in the famous tapestry.

We made one last stop, at Fontainebleau, only 60 kilometres or so from Paris, south/south-east. We were by now a little exhausted with visiting ‘museums’ but did wander through the courtyard of the fabulous Chateau Fontainebleau and found out it will be easy for us to tour when we return in late March, when we start our journeys for 2013.

Looking across the impressive courtyard of Chateau Fontainebleau to the famous horseshoe-shaped staircase.

The highlight of our visit this time was eating at the restaurant l’Axel – run by a Japanese chef reminding us of the wonderful restaurants (in Australia and further afield) of Tetsuya.

After a whirlwind visit to Cornwall and return trip via Amiens, Rouen and Fontainebleau it was with great relief we arrived safely back in Paris and found Endellion warm and cosy, and no more snow, or so we thought.

7 Responses to Winter travels from our Paris base