Strange but true: the King of Patagonia from Reims

Posted on September 11, 2013 by Lesley and Stewart

We’re now in the Champagne capital of the world: Reims. This is the third major ‘R’ in our 2013 travels. We started with Roanne in the Loire region (232 kms south of Paris) arriving there in April. Then to Rouen (via Paris) in July going as far west as we are interested in going with Endellion (219 kms from  Paris) and now in September we’re here  in Reims only 86 kms north-east of Paris.

Our journey from Auvers here to Reims covered new waters for us from Choisy-au-Bac along the l’Aisne arriving just over a week ago. That section was around 110 kms, with 21 locks – more than we’d been used to for some time, since the Nivernais in fact. It was very quiet with many narrow and some windy stretches of water with greenery reaching out to us and changing colour every minute of the day. We were finally seeing signs of autumn and the grain silos were active at last with péniches on the water side, trucks on the road side and clouds of dust everywhere. The colours of the fields were a constant delight: everywhere shades of green and brown.

Along the Aisne, we leave Vic-sur-Aisne mooring behind us.

French Waterways staff fix a new sign on the bridge above us. Foggy mornings coming.

Some sections of the canal are narrow bursting with green – starting their autumn colours.

Above the Berry-au-Bac lock 1 silos are active, with trucks one side and barges the other. 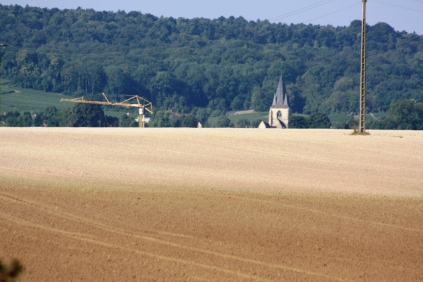 Along the canal de l’Aisne a la Marne.

Every day we have sunshine – along the canal de l’Aisne a la Marne.

Autumn is coming along the canal de l’Aisne a la Marne.

We had visited Reims before, by train from Paris, back in January 2012 when it was very cold and the fabulous interior of the Cathedral was even colder! But last week temperatures reached 30 degrees, almost too hot!

During a slightly milder day as we wandered along the towpath of the canal we came across a ‘curiosity’ which stopped us both in our tracks. It was a plaque attached to a tall ancient stone wall beside locked gates which read ‘Site du chateau des Grenouilles Vertes, demoli en 2001, residence d’Achille Laviarde (1841-1902) 2eme roi de Patagonie’.

Plaque at the site of the demolished chateau Grenouilles Vertes, Reims.

Translated this states the chateau Green Frogs was demolished at this site in 2001, it belonged to the second King of Patagonia.

We were intrigued. Was there really a King of Patagonia? If so, how come he was French? What was the ‘Chateau of Green Frogs’ and why was it demolished? What did the building look like? We had to find out more.

The usual finger search through Google came to the rescue. We found that in fact Patagonia (and neighbouring Araucania) had a king who was French. The Mapuche people lived in Araucania and Patagonia but in the mid-1800s their land and culture were aggressively under threat from the Chileans and Argentines. In the hope of retaining their land and culture they decided (or were persuaded) to create a constitutional monarchy expecting to gain European support for their cause.

D’Achille Laviarde, the second King of Patagonia who lived at the old chateau.

The nominated and elected first King was a Frenchman named Orélie-Antoine de Tounens,  a ‘lawyer/adventurer’.  Some records state this constitutional monarchy was officially recognised by Spain, Britain, France, Peru and many other nations although today the disputed territory is ‘occupied by’ (is part of) the Republics of Chile and Argentina. Dispute continues through Phillipe Paul Alexandre Henry Boiry (Philippe I) the incumbent monarch (the sixth King) who assumed the throne in 1951.

We found a photo of the old chateau des Grenouilles Vertes (Green Frogs) which was bought in 1867 by King Gustave-Achille Laviarde, (Achille I). As the plaque stated d’Achille Laviarde was the second King of Araucania and Patagonia who reigned from 1878 until 1902 when he died without ever visiting his ‘Kingdom’. It seems some time after his death the chateau and grounds were used as a public garden and nursery named “Chalet des Rosiers.” And then, in 2001, the entire site was closed up and the chateau/chalet demolished.

That was a very interesting piece of trivia .. if you would like to know more visit this website: http://www.steelcrown.org/  .. or just get Googling!

However, more than trivia, one of the reasons this sign stopped us in our tracks was the connection to Patagonia, Stewart tells this story.

Both Lesley’s company Toshiba Australia and mine Garner MacLennan Design had provided support for the Museum of Contemporary Art in its early days.  So in around 1993 we were independently invited to a VIP preview of an exhibition focussed on old photographs of scantily clad Patagonians (quite possibly Mapuche Indians amongst them) who seemed to be struggling to survive in such a cold and inhospitable place.  What all this had to do with Contemporary Art, we weren’t sure then and still aren’t!

Never-the-less, then curator, Bernice Murphy enthusiastically escorted us and the rest of the group around expanding on the works.  All was going well until we got to a cabinet with a human skull inside which had an illuminated Perspex tube sticking out through its top.  Bernice explained this was the skull of one “Mad Red MacLennan” who had apparently been shot after going off the deep end attacking and killing a number of hapless Patagonians.

I must have asked for further details as glancing at my name tag, she suddenly realised I was a MacLennan.  Then she saw that there was a Lesley MacLennan there as well. “Oh what a coincidence” she remarked, quickly changing the subject and moving us all along.

Whether this actually was the head of a member of the clan MacLennan is open to speculation.

The Ancestry Boards website confirms there was an “Alexander MacLennan, known in Patagonia as the Red Pig due to his killing of natives. He died in Punta Arenas, Patagonia, in 1917, aged 45”, it says. However Alexander is said to be buried on the Black Isle near Inverness Scotland.  With or without his noggin we don’t know, but it will certainly give us something to talk about when we meet up again with clan chief Ruairdh MacLennan of MacLennan when he and we visit Sydney in November won’t it?

Loving great waterways of the world.
View all posts by Lesley and Stewart →
This entry was posted in History, Waterway life and tagged Champagne, Endellion barge, Patagonia, Reims, Travel. Bookmark the permalink.

2 Responses to Strange but true: the King of Patagonia from Reims

Leave a Reply to Lesley and Stewart Cancel reply