For the first time since our barging days commenced in 2008 we are sitting around on board going nowhere when the weather is warm, the waterways are inviting and most of our friends and neighbours have already departed for their seasonal joys.

The past few months, since our last blog, have been erratic with health and events outside of our control. But, the Port de l’Arsenal, despite expecting us to have left by early April, have juggled our mooring position and continue to look after us.

In March we visited Cornwall to spend time with my family when Stewart became ill and ended up spending a month in hospital, the latter part in the totally excellent Marie Therese rehabilitation centre in Hayle (west Cornwall). During his recovery period we could be tourists in our hire van, visiting St Ives, Falmouth, St Just and the fabulously diverse countryside of the far west of the British Isles.

Google map showing our travels in the far west of Cornwall.

It was also a sad but vital time to be with our Cornish family and friends.

Hayle harbour at the bottom of the tide (which seemed to be most of the time!). 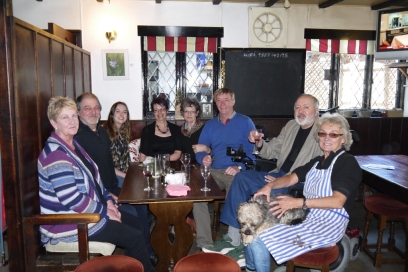 The wonderful King family (my father’s side) at the Hawkey family pub, The Cornish Arms, Pendoggett.

The exotic Trebah gardens at Mawnan Smith in Cornwall.

Wandering the hilly Trebah Gardens in the sturdy Invacare wheelchair.

Later I returned to the west-country (Stewart managed perfectly here in Paris) to be with my ‘little’ brother Jonney and separately (as they run a pub and can rarely be away together) with his wife, my dear friend Felicity. We chose to stay in the west of Britain, in Devon and Somerset starting on the south coast at Dartmouth.  We needed rest and solace after our remarkable and adored mother, Joan Hawkey, passed away the month before. We took long and brisk walks over the hills of the south coast of Devon and up onto Dartmoor , then across to the north coast where we drove along the cliff-hugging toll roads around our base at Porlock (also view the webcam at Porlock Weir). It was a treasured time together.

In the past week, here in Paris, we have enjoyed time with Stewart’s brother Ian and sister-in-law Pammie who stayed on board a few nights before heading off to the Burgundy countryside to investigate farming in that part of France. With a large sheep and cattle farm in Australia (near Goulburn), and taking the first overseas holiday in more than 25 years, Ian can’t be too many days out of touch with farming, it seems.

However, he coped with the tiny bunk room on board Endellion – and what better place to be, if you have to be in a city, than here in the heart of Paris? We’ve relished a BBQ on our stern deck, the low-key cafe life of the Bastille area (11th, 12th, 3rd and 4th arrondissements), and visited a few of our favourite haunts together.

Ian, Pam and our friend Anik.

Meanwhile, we keep attuned to the travels of our friends and fellow boaters by reading their regular communication, reliving our journeys on the same waterways, such as the blog from Guy and Marlene, Le Chat Lune, who left Toul a few days ago having arrived via la Meuse. They should be crossing paths right now with Kay and Josh on board Peridot who have just left Nancy and are heading for the canal des Vosges. Judy and Charles on board Anna Maria report in regularly as they head north for the Netherlands. Sue and Ulick on board Quercy have disconnected from us (they were moored to our side for the winter) and departed heading south for the Burgundy canal and St John de Losne.  Anna on board Isabelle tells us she will be heading to Meaux along La Marne by the end of June. And the rest of us long-term port de l’Arsenal boaters will probably slowly trickle off to La Villette, around six kilometres away, up the canal St Martin.

Our plans are still on track to return to Australia for six months (at least) from October .. meanwhile we are looking forward to a summer in Paris, or nearby.

Loving great waterways of the world.
View all posts by Lesley and Stewart →
This entry was posted in Paris and tagged Endellion barge, Marie Therese House, MS, Paris, Porlock. Bookmark the permalink.