Posted on September 3, 2014 by Lesley and Stewart

It’s been my aim to write an update to our blog for months and as we are now into September, Spring here in Australia, I realise I just have to do it!

The reason for our long gap in communication is the difficulty in writing about our non-boating journey since our last blog. Normally we would be talking about the wonderful waterways we’d explored. Instead we have to report on our extraordinary road and air journey from Paris back to Sydney. 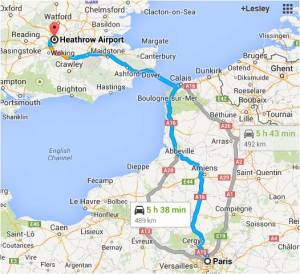 We were sent home to Australia (repatriated) by Stewart’s health insurance company (Allianz) because of another hiccup with MS. Everything had been going so well after the month-long spell in Cornwall where Stewart made a total recovery (to his previous state of health) thanks to the Marie Therese rehabilitation centre (at Hayle).

However, the day after brother and sister-in-law Ian and Pammie left us in Paris to return to Australia, Stewart found the MS had hit again and he couldn’t get out of bed. For those who know about MS this is sometimes called a relapse, or an attack or incident or episode. That’s MS for you .. we are yet to find any clearly defined term to describe what happens when a person with MS all of a sudden is presented with new and/or awful symptoms. In Stewart’s case it was loss of most muscle power. It wasn’t possible for him to move his fingers, arms, in fact the whole of his upper body which normally is strong was like the lower body, ie, not responsive.

We had our local doctor visit but all he could do was put Stewart on an extremely high dose of cortisone – so high our pharmacist kept repeating the question “but how much does he weigh, he must be huge”.  Perhaps this unusually high dosage was what led to Stewart seeing swirls of black ants on the ceiling, curtains and walls of the bedroom on board. We won’t dwell on the painful story of how for the next 10 days we coped on board Endellion until our health insurers (who have been professional and supportive throughout our ordeal) told us “you have to go to a hospital” which they then arranged. 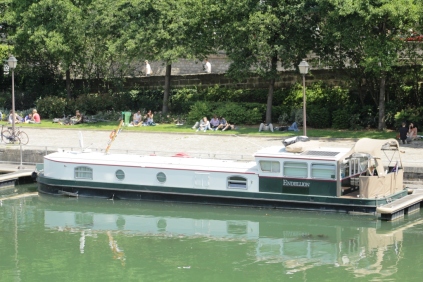 Endellion at the Port de l’Arsenal in Paris – a very popular spot for picnics.

Hotel boat season, this one coming into the port from the Seine.

Right beside Endellion a young fisherman has caught a mighty fish (carp?)

The American Hospital, in the 17th arrondissement of Paris, was an interesting experience, a mix of good and almost negligent – perhaps a story for another time. It was from there that we had one of those “it only happens to us” (of course not true at all) experiences. Our insurers do this all the time, that is, repatriate their clients from anywhere in the world. For our two nurses, who flew over from Australia to escort Stewart home, it was quite a simple task from Paris to Sydney. These two major cities were equipped with every convenience to accommodate travellers whether sick or not – unlike some remote locations of Africa for example from where they’d had to repatriate in the past.

The biggest challenge for the insurers was finding a suitable flight. Allianz suggested and booked Malaysia Air but when we reminded them that if Stewart was to use their seats the arms would have to be able to lift up or be removed for the transfer into and out of it. Malaysia Air seats didn’t have this functionality which meant a further week’s delay and switching to Qantas.

When we asked the nurses (Melinda and Czarina) who had just arrived from Australia what details they had for our journey the next day from Paris to London (given Qantas don’t fly from Paris) they said “none”. They knew as much as we did! Through the previous weeks of discussion about repatriation we had suggested Eurostar, the quickest and smoothest commute, and at one stage this was considered by the Allianz local French agents.  By whatever means, we were told, we would be setting off from the hospital at 11.00am the following day by ambulance.

So .. with our two nurses we were ready for our forced departure from gorgeous Paris. Stewart had been resident at the American Hospital for more than three weeks, after 10 days on board Endellion unable to move. He’d made a good recovery but was still unable to make transfers unaided, and in extremely good spirits (as always).

The ambulance driver (Lucien) and his side-kick arrived and told us for certain we were not using Eurostar which therefore meant a minimum nine-hour journey to Heathrow airport via Calais. Lucien paced around getting anxious like us about whether we were using the train or the ferry to cross the channel. Meanwhile a taxi driver also arrived, ready to take Stewart’s power wheelchair and all the bags, plus one passenger. Lucien had the phone to his ear for the following half-hour while we waited to know our means of transport from Calais: rail or ferry.  No-one seemed sure whether there would be space on the ferry, and the train system apparently was closed due to a disruption within the ‘chunnel’. By now we all realised this was the day the Tour de France (which this year started in Leeds) left Britain for France! Lucien didn’t want the task of finding a hotel for a man on a stretcher and his entourage, and perhaps no flight for days. The sensible option was to stay on at the American Hospital while we waited for news about the method of crossing the channel.

Dramatically and suddenly Lucien (we’re not sure why he was in control) started shouting in French. Someone at the end of his phone had confirmed there should be space for the ambulance and taxi on board the ferry and with no communication to the rest of us he charged out of the hospital with Stewart in his stretcher on wheels.  A big complaint of every stretcher bearer in Paris (and Stewart had experienced many this year) is “il est trop grand” .. he is too tall. Yes, 188 cm (6’ 2”) is long when laid out on a French stretcher. His feet hang way over the end of it and so get “in the way” banging on walls as they make turns, or catching in equipment standing in corridors, and so on! The stretcher handlers always seem to blame Stewart, he’s just too tall.

At this point, before we’d set off in the ambulance, the taxi driver (recruited it seemed by the ambulance company) said he couldn’t go beyond Calais. How was this to work, we asked within our group of travellers. When the taxi stops at Calais, the taxi driver proposed, he could help get the power wheelchair and suit cases onto the ferry and from Dover we could get another taxi. No .. we travellers agreed, this was not going to work. In the background of conversations Lucien and he came to some sort of agreement (after which they appeared to hate each other) and luckily for us the taxi driver stuck like a limpet to the stern end of the ambulance.

From leaving the hospital, with lights flashing and siren blaring (to get through the thick traffic as it came and went), it was touch and go we’d make it to Heathrow airport in time for the flight that night. 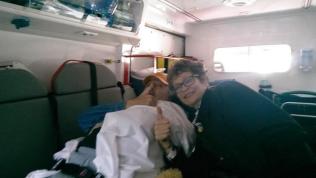 Stewart and Lesley on board the ambulance ready for the nine hour trip to the airport. 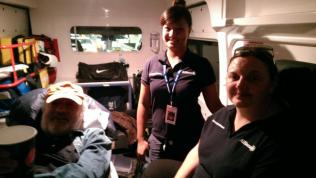 Stewart in the ambulance with Czarina and Melinda, our fabulous Australian nurses. 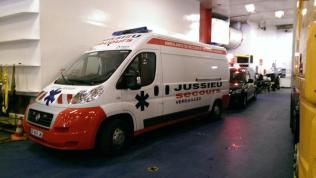 Lucien’s ambulance with the taxi tucked in behind (as always) on the ferry to Dover. 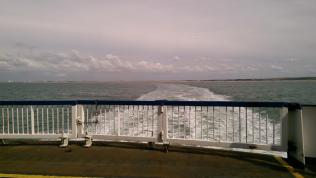 Leaving France behind us. 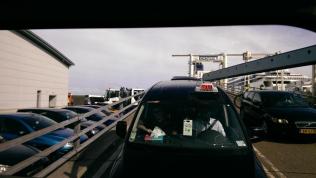 Leave the ferry at Dover, our taxi is glued to the ambulance ready for take-off. 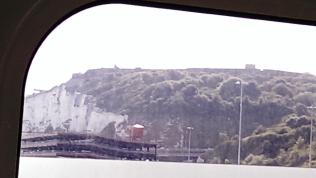 We see the white cliffs of Dover from our ambulance windows, we must be heading in the right direction. 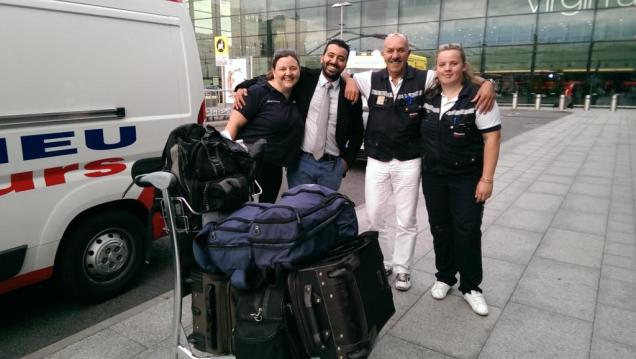 A greatly relieved crew, Melinda on the left with the taxi driver, Lucien and his side-kick – at Heathrow airport.

It took the expected nine hours, despite often reaching 160 kilometres per hour on the various sections of motorway in France on the right-hand side of the road. We exited the ferry at Dover under escort of the port authorities, and continued the frantic race to the airport now on the left-hand side of the road. The poor taxi driver was excellent, sticking to the rear of the ambulance throughout, but having no idea how he was going to get back to Paris! Where was he to stay, how was he going to eat .. he had not come prepared to be in the UK.

We are happy to say we arrived in time to meet the Qantas flight which was about to board as we pulled up, lights flashing. The flight was excellent, the cabin crew and our nurses, Melinda and Czarina, were wonderful. Special arrangements had been made for Stewart to stay on board at the stopover in Dubai, and there was a wheelchair taxi ready to take Stewart from the airport (with the nurses) to the Royal North Shore Hospital (RNSH). I was told there was no room for me so I headed off to the hotel adjacent to the hospital with the bags and settled in.

Stewart spent a month at the RNSH followed by two weeks in rehab at Metro Rehab in Petersham.  We’ve been under one roof now for the past few weeks, quite a novelty. Stewart continues to gain strength, he works very hard with his physiotherapist and we have plans for a return to Paris next year – Spring in Paris.

Here in Sydney, it was the first day of Spring a few days ago. We don’t have to remind ourselves what a lucky life we have .. we just look out of the window. Straight ahead we watch the busy harbour and stare at the massive structure of the harbour bridge with trains and cars of commuters streaming along it. To the right we have the gleaming white sails of the opera house, and to the left beneath (looking west) we see the ever-changing development of Barangaroo headland park (a controversial development here in Sydney – more here). However, we also miss Paris, our friends there and home from home aboard ‘Endellion’.

PS: In answer to Carolyn and John’s question, “but what happened to the taxi driver”.. we have to report, we don’t know. However, the lovely and thinking senior nurse, Melinda, had provided a generous financial donation towards his overnight accommodation and welfare.

9 Responses to Paris to Sydney